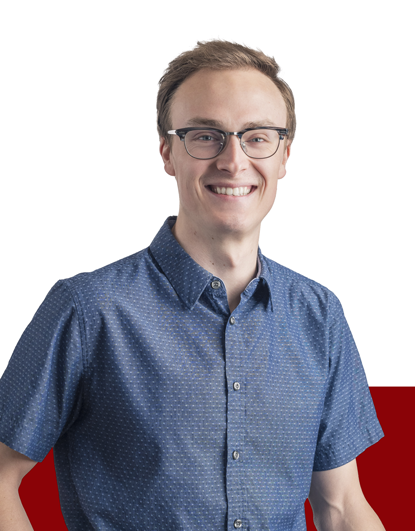 Mitchell love puns so much he made an Instagram page all about them.

You don't nail a Mikulak on the pommel or a Diamadov on the parallel bars without serious skill, determination, and flexibility. As it turns out, those skills also come in handy in the ever-changing world of digital media. Case in point, Mitchell Awisus, former Division 1 college gymnast and Digital Media Specialist at Estipona Group (EG).

Mitchell attended the University of California, Berkeley where he earned a bachelor’s degree in political economy while competing on the gymnastics team for the Cal Bears. With that impressive degree — and an equally impressive strength to weight ratio — Mitchell entered the world of…digital media? While his career path might seem like a non sequitur, Mitchell uses the analytical skills he developed studying economics — as well as his ability to translate complex data into accessible language — daily.

At EG, Mitchell helps companies use digital data to develop strategies that support their goals. Combining creativity and strategy to solve complex problems, he employs market research, trend identification, monitoring, and data analysis to improve business performance. In other words, he turns impressions, referrals, clicks and likes into executable marketing tactics. He also acts as a bridge between EG’s strategic and creative teams, helping ensure the work is strategic and effective.

Before landing at EG, Mitchell followed his curiosity to digital marketing courses, his head to customer support, and his heart to disease investigation for the Washoe County Health District. He spent more than a year on the disease investigation team, serving his community during a challenging time while putting his improvisational and problem-solving skills to the test by tracking disease transmission.

A Reno native, Mitchell is glad to be building his career in his hometown. While his competitive gymnastic years are behind him, he still enjoys working out and staying in shape. In his free time, you can find this modern Renaissance man writing short stories (sci fi and fantasy are his preferred genres), recording episodes of his Speak Truly podcast (warning, Truly alcoholic beverages are involved), and playing classical and pop tunes on the piano.